Before getting into the field of autism, I had some pretty clear expectations for what ‘autism’ was, based on my experiences with Jon. To me, autism was: Rewinding a movie to watch the same scene 20 times over? Check. Always getting to sit in the front seat no matter who calls ‘shotgun’? Check. Obsessed with pop? To this day, Check. Refusing to listen to me when I was his babysitter? A million times check.

Now that I’ve had many more experiences with individuals on the spectrum, I’ve come to realize that some of what I think of as ‘autistic traits’ is actually just Jon being Jon. Individuals (with autism) are so unique – they have their own strengths, interests, emotions, frustrations – none of which is limited or defined by their autism.

One of Jon’s personal traits is that he LOVES to retell stories from our childhood. As you know, Jon doesn’t have great communication skills – he can struggle to carry on a conversation, express his emotions, or ask other people questions – but he is awesomely verbal when recalling memories (see Walking the Turtle post).

And the best part about this trait? He cracks himself up when he talks about the ridiculous things he used to do or the crazy situations he would get us into. Even though many of these situations were, at the time, incredibly stressful (i.e. him driving the van into the side of our house when he was 6), Jon manages to find them hilarious now. He retells them in a way that has us all laughing. It’s a pretty endearing trait – 20/20 hindsight at its finest.

Each week, I call Jon on the same day, around the same time – our Thursday evening fireside chat, if you will. My phone alarm goes off, my calendars beep reminders, and I get an email that I refuse to mark as ‘read’ until the call has been made. In my mind at least, this consistency means something to Jon. One day, I forgot to call him on a Thursday (you can imagine my dismay), so I called him on that Friday instead. His exasperated, indignant response: ‘Why are you calling me today? Good BYE!’.

Even with this pre-scheduled and routine call, most days our conversations only last between 2 and 3 minutes. We have a pretty standard script for the beginning of our call: “Hi bro, how’s it going?’ ‘Good, how are you?’ ‘Good’ Then we pause…

Our choose-your-own-adventure part of the call now begins. I can either A. Launch into an overly-animated story of something ridiculous that has happened recently in my life (stories that involve personal embarrassment are typically his favorites) or I can B. Bring up a memory of something ridiculous that occurred in our childhood (see Walking the Turtle) or I can C. Wait – pause, pause, pause – hoping that Jon will initiate a conversation.

C is clearly the hardest for Jon – like many people with autism Jon can be great at answering questions, but starting a conversation or asking a new question is really where his core deficit lies. So when it does happen, when Jon asks me something out of the blue, it’s pretty amazing.

Before leaving for Nigeria this past March, I did have one of those amazing C conversations. I told Jon that I wouldn’t be able to call him the following Thursday because I was going to Nigeria. And then I waited…bit my tongue…and waited some more…

‘What are you doing in Nigeria?’ he asked.

Growing up, I’m sure I never gave Jon the opportunity, the time and silence he needed, to be able to process and ask his own questions. Now, however, I think Jon has learned just how to shut me up – a simple question like that leaves me without the words to answer it. 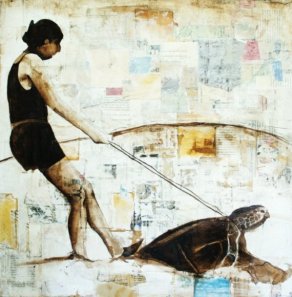 Last weekend was my mom’s birthday – a BIG birthday, but I won’t say anything more than that…

Rather than throw a party for her – limelight is not her style – we decided to gather letters from her family and friends. We sent out notecards, asked people to share their favorite Deb-isms, and compiled them all in this (super cute) album. Oddly pinterest-esque for me, but very meaningful for my mom who cherishes her relationships above all else.

Of course, we knew my brother would have a good story or two, and we really wanted him to participate – it would mean so much to my mom. But you never know with Jon…

When we addressed a ‘mom notecard’ to him a few weeks ago, I just wasn’t sure what we would get back, if anything at all. There were a lot of steps involved – including coming up with a story, writing it down (fine motor skills are hard for Jon), and sticking it back in the mail. Any one of these steps could derail the entire process.

A few days after mailing his envelope, I debated making a follow-up phone call – then decided against it. I figured if I tried to encourage him to complete the notecard, it’d all be over. Jon’s never been good at ‘taking orders’ from other people (family genetics, not autism!), so a little sisterly input wasn’t going to help. And I also wanted to see if Jon could do this on his own.

To my amazement, not only did we get a card back, but his was the first one we got back! And while most notecards included thoughtful, caring comments, Jon’s was just funny and honest. This is what he wrote:

I remember my mom let me get a turtle named Michael. I took Michael outside for a walk and lost him. Another day my mom found him in the yard when she was mowing. It was so funny. I laughed so hard I cried.

For me, this was an amazing snapshot into Jon’s brain. Now that he’s mentioned it, I also remember the day that my mom found the turtle. Her reaction was hilarious – over-the-top drama coupled with a bit of shrieking, just to make Jon laugh. And clearly, it worked. What a lasting memory for him and what a good reminder for me – you just never know when a simple moment is going to be a lasting memory.

*As a sidenote, this was one of three turtles, each named Michael, that Jon had as a child. He managed to lose each in a very unique way, and we believe that at least 2 of the 3 are now living a very posh life in the woods next to our house… 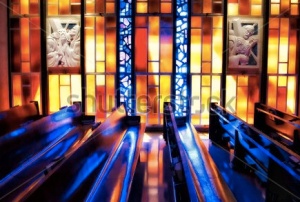 Growing up, my family attended church every Sunday. We typically arrived about 5-10 minutes late – standard Hench time. As much as I’d like to blame our lateness on Jon and his autism, let’s be honest, I was the teenager whose hair wouldn’t curl just right – and clearly God needed my bangs in a tight spiral before He could answer any of my prayers.

We always sat in the back, the balcony back if it was open. This was not just because we were late, but also because Jon could make quite the scene in church. For him, sitting quietly for an hour was a struggle, well past the age when church means Cheerios and storybooks.

Jon would be the 10…12…14 year old kid sprawled out on the pew. His usual position was laying outright, head in my mom’s lap and feet on whomever was close enough – related or not. As an incredibly self-conscious teenager (remember the bangs?!), I was mortified. I was so naïve to Jon’s autism that instead of thinking about what a struggle this hour was for him, I spent my hour ducking my head so that friends, and especially non-friends, wouldn’t see that this was my family.

Without fail, the one time Jon would sit upright was when the Offering basket came around. Clunking his feet on the floor, his head would pop up, and he’d eye that basket like a hawk. He knew what his job was – take the money from my dad, put it in the basket. Heaven forbid if someone else tried to do his job.

This was all fine and good until Jon began learning the meaning of dollar bills…he learned that you could use those bills to buy a pop, or a new baseball cap, or a jersey. Those bills meant something. So why on earth would he possibly put his money in the basket? Better yet, why wouldn’t he take out the money that was already in the basket?

Well, sure enough, this is what happened. The church’s offerings quickly became Jon’s donations as he pocketed all of the bills in one fell swoop.  You can imagine the (outdoor voice) chaos that ensued – Jon was incredibly satisfied with his plan; my parents were embarrassed; I was amazed.  Curled bangs or not, at this point I’d surely get more prayers answered than Jon!

After that incident, I felt much less concerned with Jon’s sprawling out at church. In some unconventional way, he had taught me that I’d better keep my mortification in check – otherwise there were much bigger and better things he could do! To this day, I’ve kept that lesson – I’ve learned to appreciate Jon’s eccentricities, his antics, his nonconformity, his legs on the pew.

And I know if I were to ever forget this lesson, Jon would be right there, pulling some crazy stunt, just to remind me.

This weekend, we had a scare with my brother. Like many of us, he really struggles to communicate when he’s frustrated (imagine yourself during a fight with a significant other – that amazing comeback?! Yeah, comes to you about 5 minutes after the disagreement, right?!). Unlike many of us though, my brother’s inability to communicate is a result of his autism.

So last week, he really wanted to buy this lunchbox. Your run-of-the-mill, standard lunchbox – though it was pink! – was, to my brother, an obsession. Something he had to have, even though it was going to cost him his entire week’s pay – $13.50. (An average to low salary, even for my brother, who enjoys taking ‘vacation days’ more than the average bloke.)

So he made the decision – buy the lunchbox and forgo dinner out on Friday night. This was a great decision…on Thursday. But when Friday came around, to say there was ‘buyer’s remorse’ would be an understatement. He regretted the decision, hated the lunchbox, and wanted nothing more than to go to Taco Bell.

The staff that helps my brother is always told to ‘pick their battles’ – which is just a nice way of saying there are a lot of battles. This staff on Friday evening, God bless her, didn’t even realize she was picking a battle when she started suggesting all of the ‘free’ food my brother could eat at home.

Needless to say, my brother went 0 to 60 in a split second. The details are fortunately not grim – a push here, some angry words there – but a lot of people went through a roller coaster of emotions that night, myself included.

As I was (indescribably) anxiously awaiting results from the evening’s ‘battle,’ I was reminded about why I do what I do. My relationship with my brother has never been standard – in one single situation, he can make me feel so immensely angry and so unconditionally loving. He pushes me to understand situations in an ‘out-of-the-box’ way, and he challenges me to help him work through his autism, rather than use it as an excuse for his behaviors.

This blog won’t be all about my brother or his autism because I know there is more to life than that. But everything I do is shaped by that, by him. So thanks, bro, for making me who I am…I love you, you brat.